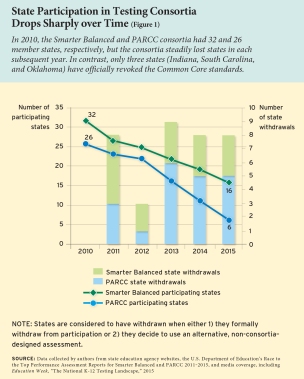 My comments are in (bolded parenthesis), the article references in quotes.

“In 2013, the Education Next poll showed 76 percent of teachers and 63 percent of parents supported the standards (common core). By 2015, the same poll found that just 40 percent of teachers and 47 percent of parents supported them.” (Some of the why according to EdNext): “We start testing on standards we’re not teaching with curriculum we don’t have on computers that don’t exist.” (said almost every teacher in every school) …”massive technology failures, owing to insufficient preparation and contractors who failed to deliver the needed technology upgrades.” (a forced expense on local school districts during a time of severe budget cuts)…”testing times and proficiency benchmarks viewed as developmentally inappropriate and, in some cases, a waste of resources” (weeks of testing virtually shutting down learning 3-8 and 11)…”States varied widely in how well they communicated with educators, parents, and the general public about the new tests”…(same as lack of communication on the common core standards themselves which were rushed through and approved by state boards of education without local school districts and community input.)

“Through Race to the Top, the administration offered $4.35 billion in funding through a competitive grant program designed to encourage (bribe) states to enact the feds’ preferred school-reform policies—(fed budget carrot dangling here) including the adoption of better standards and assessments. Most states were willing to sign on to Common Core and the aligned tests to improve their chances of winning a grant…”(not for the sake of better standards or testing, but to help defray the horrendous effects of the budget crisis gripping schools across the country.)

(EdNext went on in the article to say that the tests are better than what we had before and that some states are still using them. Comforting or excuses?)

Now my two cents worth, without the parenthesis.

Who really benefits from the so called college and career ready standards and assessments? Why do we believe that these standards are the best for our students? Why do we believe that these high stakes test are worth whatever we are paying for them? Why do we punish English language learners, children with special needs, and those kids that don’t do well with the force-fed type of learning that catapults them into a testing frenzy?

I know – I perpetrated this crime myself, for which I am truly sorry. I stand guilty as charged, but hope that my voice can reach those who are still in the trenches – those who know in their gut that good teaching and learning is not measured in high stakes tests or legislated mandates.

Real learning comes at different times, in different ways, with different children, working alongside a skilled teacher/facilitator, without the use of bribes, rewards, punishment, artificial deadlines or irrelevant testing and evaluation. This my friends is doable, sustainable, and a responsible and urgent alternative to what we are currently doing in our schools.